The One With The Honey Baked Ham. 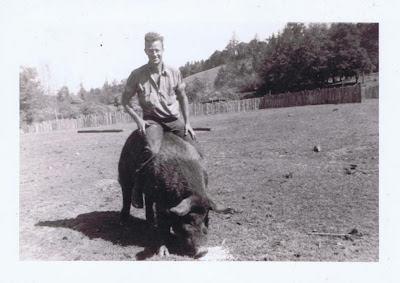 Dear Lover,
I'm a vegetarian.
Because I hear animal noises when I eat meat.
I know.
I'm cracked.
It's not that I have anything against eating meat.
I'll cook it for you anytime you like.
It's not that I'm mentally unstable.
Let's just blame it on these damn heartstrings.
You see.
When I was in middle school.
I raised a couple of pigs for 4-H.
Mine was named Honey.
No, I did not understand the irony of the name then.
My brother's was named Spot.
And these were no ordinary swine.
They had true personalities.
And would run around the yard with my dogs.
Snorting their own sort of bark.
Wagging their own sort of tail.
Nuzzling at the crook of your knee for a scratch behind their ears.
I was devastated, of course, when I found out on the day of the stock show.
From a crooked tooth boy who annoyed me to no end.
What exactly was going to happen to Honey.
Let's just say, I've never been able to eat at Wendy's ever again.
From the memories of eating there after saying goodbye to my dear pet.
My tears dripping into my french fries and ketchup.
Spot, however.
Went to live with my great uncle.
Who said he'd use him to breed.
A few years passed by.
The memory of Honey still lingered.
But that did not stop me from eating bacon.
Ah, bacon.
Food of the gods.
A few more years.
I have to admit, I'd all but forgotten Spot.
When suddenly we got an invitation to go visit my great uncle and aunt.
We arrived late, just in time for dinner.
As I sat there chewing on the main course.
My great aunt leaned forward with a wicked smile on her face.
And asked, "How do you like the meat?"
I answered respectfully just how wonderful it was.
Upon which, she responded with, "It should be!  You raised it!"
Thus.
Love,
Me.
Posted by Unknown at 6:00 AM